How to use Nasacort®

See how to prime, use, and clean your Nasacort® Allergy 24HR bottle.

Get the bottle ready

Before first use, a new bottle must be primed.

Repeat these steps if not used for more than two weeks. 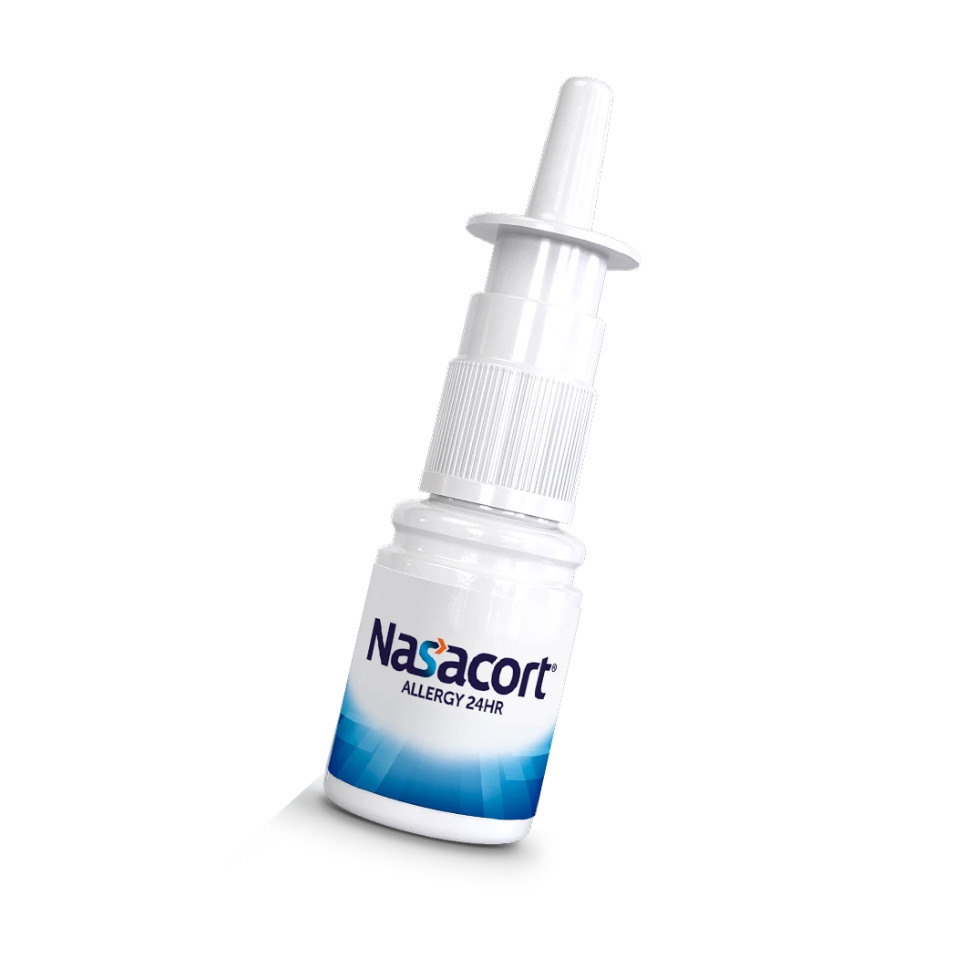 Blow your nose to clear the nostrils. Remove the cap. Shake and then hold the bottle with your thumb underneath the bottle, and the spray nozzle between your fingers.

Press your finger against the outside of your nose to close off one nostril.

Place the tip of the spray nozzle into the other nostril and aim toward the back of your nose. The nozzle should not reach far into the nose. Do not spray toward the nasal septum (the wall between your two nostrils).

Spray into the nostril while sniffing gently, and then repeat for the other side. Wipe nozzle with a tissue after use. Replace the cap by pressing it down over the spray nozzle.

Avoid blowing your nose for 15 minutes after use.

If the pump does not spray properly, the nozzle may be blocked. Never try to unblock nozzle with a pin or any other object. Instead, clean the nozzle as shown below. How to Use Nasacort Video

Text on Screen: "How to Use Nasacort"

A Woman talking to us : "Hey there, fellow allergy sufferer."

Behind her a dog walks towards us. She turns around and greets the dog. The woman : "Hi, puppy!"

The woman : "Outdoor and indoor allergens, can trigger nasal allergy congestion and other symptoms like that." The woman snaps her fingers.

Now standing in front of indoor brick wall with spotlight she holds up box of Nasacort.

The woman: "But you can get big time relief with Nasacort. We're talking 24-hour, non-drowsy, nose-friendly relief with no scent or harsh taste.Now, here's how to use Nasacort."

Part 1 - Getting the bottle ready

Visual: The product is packaged as a nasal spray.

The woman : "Before using your new bottle of Nasacort, you have to prime it. Just remove the cap, shake the bottle, tilt it away from your face, press and release the spray nozzle until you see a fine mist in the air. Repeat these steps if you haven't used your bottle for more than two weeks."

The woman : "First, blow your nose to clear out your nostrils. Next, remove the cap, shake the bottle, then hold it with your thumb underneath the bottle and the spray nozzle between your fingers."

Text on Screen: "Step 2: Press finger against side of one nostril."

The woman : "Then, press your finger against the outside of your nose to close off one nostril."

Text on Screen: "Step 3: Carefully place tip of nozzle in other nostril."

The woman places finger on one nostril and places tip of spray bottle into other nostril, aiming tip towards back of nose away from septum.

The woman : "Place the tip of the Nasacort spray nozzle in your other nostril, making sure it doesn't reach far into the nose."

Text on Screen: "Step 3: Aim tip toward back of nose, away from septum."

Text on Screen: "Step 4: Spray whole sniffing gently. Repeat on other side."

The woman talks to camera in studio. Camera cuts out to reveal her standing in studio but in a patch of real flowers.

The woman: "Then, aim the tip toward the back of your nose, taking care to avoid spraying toward the nasal septum, the wall between your two nostrils.Spray it to the nostril while sniffing gently, then repeat on the other side. That's it. Then wipe off the nozzle, replace the cap and you are ready to enjoy 24-hour, non-drowsy relief with Nasacort. Bye"

Take a closer look at allergy triggers and how to manage your symptoms.